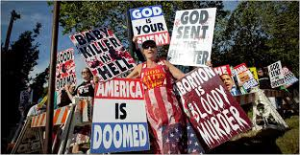 Four Supreme Court judges are in their late 70’s, so relating to the current generation for them must be extremely difficult.   Perhaps it is time to add some Aricept to their hot milk before they go to bed every night, so that the possibility of clarity is thrust upon them the following day, particularly when they are making critical decisions that affect the lives of the young people in this country.    Instead it appears that Cardinal Egan’s limo driver may be sneaking into the Courtroom and filling their bottles of Perrier with “holy water”.

I have scoured the twenty-seven (27) current amendments to the Constitution and have totally failed to find one that “guarantees the right to harass” or “guarantees the right to intimidate”.   Obviously, I am missing something, as the Supreme Court decision on Tuesday, June 24, 2014, struck down the Massachusetts law prohibiting anti-abortion protesters from venturing within 35 feet of an abortion clinic’s entrance.  As always, when there is no real correlation, the justices cite the first amendment, i.e. freedom of speech, as their primary defense of bad decisions.  Yet, the same Supreme Court that denied these victims a “buffer zone” at an abortion clinic, has a major encroachment ban of its own, “no protesting on the plaza in front of the court building”.   The only conclusion that can be drawn from this anomaly is that the First Amendment freedoms only apply when it is convenient or that its precepts simply do not apply to them.

A name change may be in order (or “out of order”).  We could rename this group, the “Maleficent Nine” in honor of a recent Disney smash hit, the Supreme “Cult” as per the intrusion of religion into their judgments or “the Supreme Tea House” based on this decision and other related ones.

Ron Kuby, Esq. pronounced on his radio show that the Supreme Court decision was correct, however adding the codicil that it is somewhat conflicting that this verdict does not affect the Supreme Court rule insulating them from harassment.  If I wasn’t certain that the Supreme Court decision was inherently biased prior to Kuby’s pronouncement, that completely verifies my position.  Kuby’s political views are so far left he could easily fall off the proverbial cliff.  Kuby, who loves keeping a high public profile, has represented such upstanding citizens as: Gregory LeeJohnson, a protester who  burned a U.S. Flag at the  1984 Republican National Convention; Sheikh  Omar Abdel-Rahman, the blind cleric who headed the Egyptian-based militant group  Al-Gama’a al-Islamiyya, accused of planning and encouraging terrorist attacks against Americans;  Colin Ferguson, the man responsible for the 1993 LIRR shootings (who chose to represent himself at trial); Qubilah Shabazz, the daughter of  Malcolm X, accused of plotting to murder Louis Farrakhan of the  Nation of Islam; and Glenn Harris, a New York public school teacher who absconded with a fifteen year-old girl for two months. www.wikipedia.com.  Based on Kuby’s profile, his opinion on this Supreme Court decision is equivalent to Ann Coulters opinion of World Cup Soccer. http://www.anncoulter.com/columns/2014-06-25

In March, a federal appeals court in Texas ruled that state lawmakers have the right to require safer circumstances under which a woman may receive an abortion.  This includes requirements such as hospital admittance privileges, upgraded procedural facilities and a ban on operations after 20 weeks. New safety laws that will subsequently go into effect later this year could reduce the number of Texas abortion clinics even further. As of September 1, 2014, abortion clinics in the state will be required to at least meet the safety standards of ambulatory surgery centers.  These type of laws are called TRAP laws (Targeted Regulation of Abortion Providers).  These regulations are a circuitous method whereupon state lawmakers circumvent the provisions of Roe v. Wade with the use of subterfuge. By making it impossible for abortion clinics to find physicians or to obtain privileges at local hospitals, these clinics are being forced to close their doors.

It is only a matter of time until the Supreme Court rules on various TRAP laws. Texas has managed to use TRAP laws to close down numerous abortion clinics with Mississippi, Alabama, and Louisiana following suit.  It is highly probable that in the next few years, it will be virtually impossible for a woman to find a licensed abortion clinic in these states to exercise their legal right to personal choice.   Yet Roe v. Wade stands firm as a women’s right to have an abortion. These conflicting decisions reek of religious bias and strong influence from right wing groups.

On June 30, the Supreme Court ruled 5-4, a completely partisan vote, that “non-profit corporations can hold religious objections that allow them to opt out of the new health law requirement that they cover contraceptives for women”.  This decision strikes down the provision of Obamacare 2010 that “contraception is among a range of preventive services that must be provided at no extra charge” to employees.  The capital fax blog 6/30/2014.

The problem is that there may be employees working for these non-profit organizations, e.g. a Christian College, that do not subscribe to this belief, employees who are reluctant to speak up for fear of losing their jobs.  Should they be financially punished, i.e. contraception is expensive, because the owners of the organization are not bright enough to realize that in an overpopulated world, contraception is a necessity? And by the way, contraception prevents the need for abortion! Duh, talk about shooting yourself in the foot! Perhaps that is why the three female Supreme Court members wrote such strong dissenting opinions.

Given the opportunity, I believe that I could present strong arguments on either side of this endless debate over abortion rights.  However, at this moment in time,Roe v. Wade remains the law of the land and thus does the right of a woman to have a legal abortion. And yet our Supreme Court continues to tap dance around this law with controversial decisions that continue to undermine Roe v. Wade.   The only word to describe this situation is “hypocrisy”.

Let us envision a fifteen year old girl, who is terrified of her circumstances, living in extreme poverty in a broken home, with barely enough food on the table for her mother and siblings.
She had a brief moment in time where she failed to consider the ramifications of a night of sexual activity and now she is paying the price. She has made an informed decision to have an abortion, even though she is extremely frightened and hesitant.   She travels alone, in shame, to a local abortion clinic, where she has secretly made an appointment, unknown to her family members.   She exits the bus a block from the clinic and begins her journey to the entranceway to the clinic, only to encounter a group of self-righteous zealots who harass her with exclamations of “baby killer” or “whore” or “you will be burned in Hell if you go through with this”.   It leaves little to ponder as to why this young girl might now be considering suicide in lieu of an abortion.

In Englewood, New Jersey, an ordinance was enacted, effective March 31, 2014 which bars individuals from “knowingly” entering or remaining on a public way or sidewalk within an 8-foot radius around the entrance, exit or driveway of a health-care facility or a “transitional facility” such as a shelter for domestic-violence victims. Individuals also cannot occupy the area stretching from a facility’s entrance, exit or driveway to the street in front of those access points.

The new rules were put in place partly to address protests around Metropolitan Medical Associates on Engle Street, a women’s clinic that performs abortions. In the months before the ordinance was adopted, advocates said protests had escalated from low-key, respectful sidewalk vigils to people shouting and confronting patients.  www.northjerseynews.com 6/28/2014

Pro-Life Protesters would argue that they are simply there as counselors to “inform”, to offer alternatives, but that would not explain the numerous incidents of violence at abortion clinics.   No one is curtailing the freedom of these individuals to state their opinions, just keep it 35 feet away from people who don’t want to hear them.  What the Massachusetts law accomplished was to restrict their right to incite violence.  Taking this issue to the next level, the following question must be asked: “how many physicians who make a personal choice to perform “legal” abortions must be killed before we recognize that they are victims, as are these young women who choose abortions, that the pro-life fanatic is nothing more than a murderer, because murder “in the name of God” is still murder under the law.

Legislation should protect the innocent and the vulnerable.  When a situation is created where violence is encouraged, the decision is poorly conceived, even if one cites a Constitutionally guaranteed freedom.  One could make a strong case that the Supreme Court decision itself is inciting violence at abortion clinics, because there is a 100% certainty that more violence will be the result of this verdict.

For the last decade, the growth of religious influence in this country has escalated to the point of no return. We have zealots insisting that “intelligent design” (creationism under a pseudonym) be taught in our schools.   We have religious leaders telling their parishioners to vote against certain candidates based on their views on abortion, in direct violation of their tax exempt status.   We have the Mormon Church threatening to excommunicate their members for posting criticisms of their religion on the internet.  And we have Supreme Court Justices being appointed based on their views on ABORTION.

There seems to be only one reasonable solution.  We need a Constitutional Amendment that clearly states that only atheists and agnostics may be legally appointed to the Supreme Court.  Finally, we would have true “separation of Church and State” and finally we might actually have justice meted out to the American public, minus the religious bias.  Brave New World!  (Aldous Huxley, 1931).  However, until then we are relegated to a Supreme Court with limited insight, divided by partisan politics, and 44.4% composed of pre-Octogenarians.  To leave the future of this country and the future of our children in their hands is an extremely frightening thought.