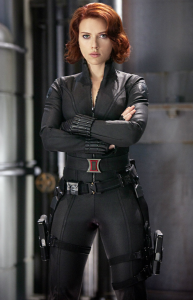 Scarlett Johannson is dazzling as “Black Widow” in”Iron Man 2”and “The Avengers”.  She is intriguing in “Lost in Translation” and enigmatic in “Girl with a Pearl Earring”.  Woody Allen appears enamored of her, as he has cast her in three of his films, including Vicki Cristina Barcelona, one of his most successful films.

Scarlett began her film career at the age of 9, and has established herself over the last twenty years as a force to be reckoned with!  She has graced the cover of numerous magazines and is always listed a one of Hollywood’s most glamorous stars.   One can assume that she has earned millions of dollars over the course of her career.  So she could easily just sit back, accept the accolades and just be another beautiful face on the red carpet.

But in 2014, Scarlett took on a new role. She took on the role of a heroine to Jews around the world, with the courage to take a firm stand for a cause that she believes in. And that is worth far more in the opinion of this blogger than all her movie credits!

When a charity has a political agenda, is it really a charity?  Oxfam Internationalwas more than willing to allow the lovely Ms. Johannson to be their “Global Ambassador” for eight years as long as she kept her own political beliefs to herself.   In February, 2014, Scarlett agreed to represent “Sodastream”, the world leader in home beverage carbonation stations, an ecofriendly company with an anti-plastic, bottle free movement as part of its mission statement.  Apparently, when Scarlett agreed to participate in an advertisement for this organization, whose very existence is in conflict with the views of Oxfam, she was no longer a favorite child.  Note: Oxfam opposes all trade from the Israeli settlements in the West Bank, saying companies are there illegally. On the Oxfam International website:www.oxfam.org, it states “Oxfam also works with Israeli human rights organizationsprotecting the rights of both Israelis and Palestinians.  Great rhetoric, apparently with little validity.

Oxfam wasted no time at all in finding a way to filter information to Al Jazeera in order to tarnish  Scarlett’s image.  So Oxfam and Scarlett have parted ways.  As for Ms. Johannson, we should give her kudos for her stance.  As for Oxfam, they have been exposed as a political group, doing charitable work, while pursuing an anti-Israel, pro-Palestine agenda.

Perhaps if Oxfam had bothered to research the situation in a little more detail, terrorist names, e.g. PLO leader Yasir Arafat, might pop-up under Palestine history.    Oxfam might have noted that the terrorist group, Hamas, has certainly captured numerous international headlines with its consistent terrorist bombings in Israel of buses and schools, along with its prolific rocket attacks on outlying Israeli communities.   Note: Hamas, who controls the majority of Palestine, remains on the list of international terrorist groups for various nations.

Apparently, Oxfam members only read Al-Jazeera articles proclaiming Israel as the “conquering nation subjugating the Palestine population” in Gaza.  It is altogether entirely too convenient to proclaim your support of certain classes of impoverished peoples, while ignoring the realities of a situation.  So let’s remove the smokescreen from Oxfam.  Oxfam will declare that anti-Semitism is not involved, but the facts appear to speak otherwise.

Tracing the history of this hotbed of hostility, let’s go back even further to discover that in 1967, in the Six Day War, also known as the Arab-Israeli War, Israel was attacked by forces from the surrounding Arab countries, Egypt, Jordan, and Syria, in an effort to exterminate them.  As a result of victory in this war, Israel captured territories in the Gaza Strip, the Golan Heights, the West Bank, East Jerusalem, and the Sinai Peninsula, all strategic locations to prevent future attacks.  Certain segments of the conquered areas, e.g. Sinai Peninsula were later ceded.  The major issue in recent years was the building of settlements along the West Bank, the Golan Heights, and the Gaza Strip.   These settlements were constructed as a buffer zone against further Arab attacks.   The fact that the international community, specifically the UN Security Council (includes Russia, a pro-Arab entity) sanctioned Israel for these settlements, does not alter the fact that these territories were the spoils of a war initiated by an Arab coalition.

Just like in the Avengers, Black Widow is kicking some butt.  Scarlett recognized that she had to make a choice.   One could argue that she made it for $$$, but Ms. Johannson is hardly hurting for money, considering her esteemed status in Hollywood.   Her choice was to be a spokesperson for an organization that manufactures a quality product, i.e. “Sodastream”, while employing Israelis and Palestinians.   She is not required to investigate whether the company’s site was politically sanctioned by Oxfam.  If anything, she might have been morally obligated to investigate whether Sodastream treats its employees well or pays a living wage.  Unfortunately for Oxfam, it turns out that not only does “Sodastream” pay their employees decently, but they hire both Israelis and Palestinians within their factory, i.e. non-discriminatory.

In this world we live in, one either stands for something or stands for nothing.  Scarlett Johannson has opted to disagree with Oxfam, to leave her position with that organization and to respect her heritage.   It is a bold stand from a courageous young actress.